I enjoyed visiting Barcelona and seeing Gaudi’s impressive Sagrada Familia Cathedral on a cruise to Italy, but didn’t have time to see everything I’d have liked to.

While doing research for Royal Wedding Scoop, I found the Santa Maria Monserrat Abbey, nestled high in a multi-peaked mountain in Catalonia. I decided that would be a good place for the villains to take Princess Patricia’s two sisters to hide them. It’s about thirty miles from Barcelona. According to Wikipedia, “Catalonia declared independence on Friday 27th of October 2017. Since then, it is an unrecognized state and the leaders of the revolution were arrested. Hopefully, things have calmed down in Catalonia since then.

In pictures I found, the view is fantastic when riding cable cars up to the top with all those interesting, sculptured mountain peaks. You can’t drive a car there, but there is a trail you can walk. Or you can take the Rack Railway train. The abbey is an active Benedictine monastery, with many rooms to tour. You can view the Black Madonna, but to visit the museum, you need to buy a ticket.

People ask why the Madonna at Montserrat is black. They attribute the change from a lighter tone, either to exposure to candle smoke or to darkening of the varnish used as a paint sealant. Later, restorers painted the wooden statue black. 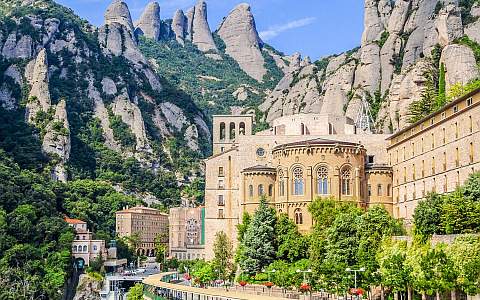 Carolyn Rae (a/k/a Carolyn Rae Williamson) - Her passion is writing romantic suspense and delving into the minds of stalkers, bombers and terrorists that threaten the course of true love. Romancing the Doctor, follows two lovers in a search for a dangerous virus spreader. It was published on May 22, 2018, Watch for the Cordillera Royals Series, soon to come, with Pretend Princess, Royal Wedding Scoop, and Holiday with a Royal. She has also written a Witness Protection Series, which includes Hiding from Love, Protected by Love, and Tempted by Love. She wrote the text of There IS Life After Lettuce (Eakin Press), a cookbook for heart patients and diabetics and has a master's degree in home economics. Whenever she tastes a delicious high calorie dish, she goes home to make a more healthy, but still tasty version for her husband to taste. Her profile, travel, and cooking articles have appeared in the Fort Worth Star Telegram, The Dallas Morning News, Positive Parenting, AAA World, Hawaii and Alaska, and Romance Writer's Report.
View all posts by carolynrae →
This entry was posted in Delicious dishes. Bookmark the permalink.